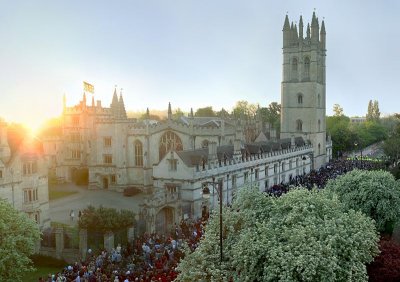 May is one of the most beautiful times to see Oxford. The month begins with the Magdalen College choristers singing in the dawn from the top of the College tower over the River Cherwell. Anyone venturing through the city streets later that morning is likely to encounter Morris dancers and other people behaving even more strangely. This year a woman dressed as a sheep was wandering across the road on all fours. By now the two main arteries into the city – Woodstock and Banbury Road – are transformed into avenues of white and pink blossom. As the days of sunshine become more frequent, one begins to think of strawberries in the park and picnics on the river.

If the weather is not so hot, the museums offer an interesting refuge – the Pitt Rivers is open again after a major refurbishment, although the Ashmolean is closed until November. The Museum of the History of Science is much more fun than it sounds, and right at the architectural heart of the university, among the greatest concentration of colleges and libraries, next to Sir Christopher Wren’s Sheldonian Theatre. There are also some very fine art exhibitions. ART JERICHO recently exhibited a rich selection of very fine etchings by Jane Peart, Heather Power and Morna Rhys, and is now featuring the 71st annual exhibition of the Society of Wood Engravers, which is not to be missed.

Tourists with a religious bent might find information of interest on our ‘Oxford Centre’ page. May being Mary’s month, why not make a mini-pilgrimage to the Shrine of Our Lady of Oxford, at the church of St Aloysius, where Gerard Manley Hopkins once preached, and which is now the home of the Oxford Oratory? In mediaeval Oxford there were many well-known images of Our Lady, including the one before which St Edmund of Abingdon made his vow of perpetual virginity at the age of twelve, placing a gold ring on the statue’s finger. Tragically, this and other signs of devotion to the Mother of God were destroyed by a later age and it was not until the nineteenth century, at the time of the ‘Second Spring’, that Our Lady of Oxford was to return.

Hartwell de la Garde Grissell was an Oxford convert who became a Private Chamberlain and personal friend of Pope Pius IX. The Pope granted him indulgences for a painting of Our Lady as “Mother of Mercy”. After Grissell’s death in June 1907, he left his his painting of Our Lady of Oxford to St Aloysius’ Church, on condition that a suitable chapel should be built. The relic chapel is where the image is venerated today, amid the bones of the martyrs who hid in the Roman catacombs and laid down their lives for Christ and His Church. On the Feast of Our Lady of Mercy in 2001, Cardinal Stafford, then President of the Pontifical Council for the Laity, said Mass in the church and prayed at the shrine of Our Lady of Oxford.

That we can address Mary as Our Lady of Oxford reminds us that although the Virgin’s care and intercession is universal, she is also able to care for each one of us individually. To have her image set up in a particular place shows that she is not remote or unapproachable, but rather our Mother, whose love for each of us is intimate and personal.

All things rising, all things sizing

With that world of good,