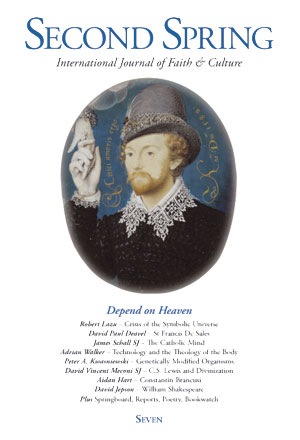 After mighty struggles, the seventh issue of our journal, Second Spring, is finally printed and available, approximately a year late. We apologise for the delay, necessitating the transfer of the journal back to the UK from Canada, and applaud your patience. As you will see from the image elsewhere on this site, our new cover (‘Depend on Heaven‘) features a rather elegant Elizabethan gentleman holding a hand that descends from a cloud. The chap is sometimes supposed to be William Shakespeare, and he is on the cover to advertise our summer school, which this year takes place at St Benet’s Hall, the Benedictine college of Oxford University. Its title, ‘Shakespeare’s Secret: The Catholic Imagination in Elizabethan England‘, is not meant to imply that England’s greatest poet was a practising Roman Catholic, since that is clearly not the case. But the best scholarship suggests that he was Catholic by instinct and sympathy, and to some extent by upbringing. His imagination – and that of many of his contemporaries – was a Catholic imagination, but the formal affiliation with Rome was naturally suppressed in the course of the English Reformation begun under Elizabeth’s father, Henry VIII. The dramatic thesis of Clare Asquith’s recent book, Shadowplay, is that like many another writer living in a police state, Shakespeare communicated his true feelings by means of a literary code that adds another whole layer of meaning to the text.

We are excited to have persuaded Clare Asquith to teach this new method of reading Shakespeare for the first time on our summer course. Together with the other lectures and events we have planned, the summer school will provide a unique educational adventure for anyone interested in the culture and religion of Elizabethan England. We have even booked a trip to Stratford to see the Royal Shakespeare Company’s production of The Tempest, with Patrick Stewart (better known as Captain Jean-Luc Picard) as the wizard Prospero. Places on this course will be highly sought after, so we advise you to write soon for further information and if possible make a provisional booking.

Second Spring 7 contains an article on Shakespeare but others on the enigmatic sculptor Brancusi (by Aidan Hart), the equally enigmatic theologian Bernard Lonergan (Tim Russ), the theology of the body and its implications for the way we view technology (Adrian Walker), the rights and wrongs of genetic modification, C.S. Lewis on human divinization, and much more, including a contribution from the well-known columnist James Schall. Just to clarify: the articles in the print journal are mostly NOT available online from this site or any other: if you want to read them you will need to subscribe, or buy issue by issue. Credit card payments for Second Spring can now be made easily through CTS.

It is worth mentioning that the proceedings of the ‘Landscapes with Angels’ conference on fantasy literature (2004) have also now been edited and produced as a beautiful special issue of The Chesterton Review. This can be ordered through the Institute web site.