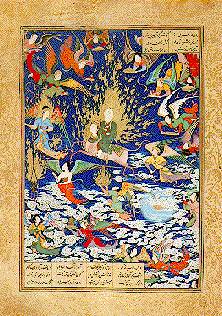 Even before the recent terrorist incidents in London and Glasgow, Islam was in the headlines in a small way in the UK, thanks to a musical work by the Christian composer John Tavener, commissioned by the Prince of Wales and performed in Westminster Abbey. Called ‘The Beautiful Names’, it is a musical setting for the 99 Names of God drawn from the Qur’an. This eclectic work (it draws for inspiration on several religions other than Islam and Christianity, and Tavener is an admirer of the perennialist Frithjof Schuon) has provoked unease among Christians who regard it as inappropriate for performance in a Christian church.

Given that ‘Allah’ simply means ‘God’, and given that none of the 99 Names would be out of place in a Christian litany, others have found the performance less objectionable. Christopher Howse (an orthodox Roman Catholic) in his column on this subject for the London-based Telegraph wrote, ‘The word Allah refers to the same God that Jews and Christians worship. There is no doubt of that. He is the God of Abraham and Isaac; the one living God. He is the God that Jesus worshipped and whom he invoked, in Aramaic, as he died on the cross, calling on him by the name Eloi.’ This comment evoked a storm of protest from bloggers, many of whom pointed out the difference between a God who is One and a God who is Three-in-One. One of them wrote: ‘if Allah is the same as the Christian God, then surely this is an argument to get rid of both of them and re-establish the true pagan religion of these isles, presided over by the noble order of druids.’

Along with the recent performance by Whirling Dervishes in the Vatican, this provides an occasion to think about the diverse nature of Islam, and to draw attention to a couple of interesting initiatives. One of these was the Open Letter of 2006 (by now signed by 100 leading Muslim authorities and scholars) in response to the Pope’s Regensburg address, which proved that reasoned and intelligent dialogue with Islam is possible. This has been followed in 2007 by an important new message from 138 Muslim leaders addressed to the Pope, the Archbishop of Canterbury, and others, which calls for cooperation on the basis of the fundamental principles of love of God and neighbour. Sandro Magister summarizes as follows:

As for content, the first letter supported positions clearly in favor of the freedom to profess one’s faith “without restrictions.”

It asserted the rational consistency of Islam, while maintaining the absolute transcendence of God.

It decisively restated the limitations placed by Islamic doctrine upon recourse to war and the use of violence, condemning the “utopian dreams in which the end justifies the means.”

And it concluded by expressing hope for a relationship between Islam and Christianity founded upon love of God and neighbor, the “two great commandments” recalled by Jesus in Mark 12:29-31.

The second letter picks up precisely where the first one left off, and builds upon its conclusion. The commandments of love of God and neighbor – found in both the Qur’an and the Bible – are the “common word” that offers to the encounter between Islam and Christianity “the most solid theological foundation possible.”

The official web-site of the second Message can be found here.

Background reading would include an important book recently published under the title Islam, Fundamentalism, and the Betrayal of Tradition (ed. Joseph Lumbard), which includes the full-length version of an excellent essay on Jihad by Reza Shah-Kazemi available here on the Second Spring site. If you follow the link from the title above to the book’s page on Amazon and scroll down, you’ll see some interesting customer reviews (from scholars and soldiers). The book has also been discussed recently on the excellent Ratzinger Fanclub blog, ‘Against the Grain’ (2 July 2007).

Another important initiative on Islam is the work of Christian scholar Michel Cuypers (a follower of Charles de Foucauld) on the interpretation of the 5th Sura of the Qur’an, reported on Sandro Magister’s site (again, just follow the link). Cuypers has applied the technique of ‘rhetorical analysis’, developed by biblical scholars, to the last of the Suras to be composed. This form of contextual and structural analysis does not threaten the faith of Muslims but employs reason in discovering the meaning of the text: it may open up a new era of Qur’anic exegesis, and happens to support those who hold that the more peaceable verses of the Qur’an take precedence over the bellicose ones.

Once again, an important issue that comes up in this Sura (which, interestingly, is partly about the Last Supper) is whether God ‘begets’ a Son. The Qur’an, of course, denies this (though it does not deny that Jesus had no human father). But it is clear from the following verse that what the Qur’an denies is not what the Bible affirms: And when Allah will say: O Isa [Jesus] son of Mariam! did you say to men, Take me and my mother for two gods besides Allah, he will say: Glory be to Thee, it did not befit me that I should say what I had no right to (say)…[5.116]

No Christian can possibly take Jesus and Mary to be ‘two gods besides Allah’. That is simply not what the doctrine of the Trinity is about. Surely it is time for Muslim scholars to admit the fact. Maybe then a deeper theological dialogue will become possible. In the meantime, it is essential that the ongoing violence against Christians around the world be denounced and curbed by Islamic authorities, and that the commonly accepted interpretation of the Shari’ah that requires apostasy from Islam to be punished by death or imprisonment be firmly rejected.

A recent column by John L. Allen Jr discusses the tension between ‘liberal’ and ‘Islamist’ forces in Muslim countries, and speaks of the emergence of ‘neo-Sufism’ (which he describes as ‘an attempt to blend the best elements of modernity with fidelity to basic Islamic values’) as an alternative. He writes:

‘This movement attracts less attention because it doesn’t produce fireworks, but it’s a significant presence within Islam, and some experts believe it may be the best way out of the present crisis. At one level, “neo-Sufism” can simply refer to a revival of interest in Sufi spiritual and mystical practices. In Indonesia, for example, reports indicate that a growing number of young university students and affluent housewives are attracted to Sufi prayer services, especially Thursday night gatherings when followers sing the 99 names of God. … Neo-Sufism as an organized social force, however, might be defined as a competitor to Islamism, with the crucial difference being that radicals want to seize political power, while neo-Sufis want to change people’s souls.’ One of the leaders of Neo-Sufism in twentieth century Turkey, Said Nursi, argued that ‘the time of the “jihad of the sword” was over, and that now is the era of the “jihad of the word,” meaning a reasoned attempt to propose Islam as a basis for a reconciliation of science and modern institutions with religious faith and morality…. As early as 1911, Nursi argued that Muslims and “pious Christians” should make common cause in defending a moral and spiritual vision of human life against the momentary illusions of consumer culture.’

The final initiative I want to draw your attention to is ‘Oasis‘, a journal published in several languages (but predominantly English) by the Cardinal Patriarch of Venice, Angelo Scola. This remarkable project is dedicated to providing information for Christians living in close contact with Islam. It was launched recently at the UN, where Prof. Carl A. Anderson of the Knights of Columbus introduced three main speakers: Seyyed Hossein Nasr, a lecturer in Islamic studies at the George Washington University; Israel Singer, the President of the Policy Council of the World Jewish Congress; and Angelo Scola, the Patriarch of Venice. The journal, which has reached its sixth lavish biannual issue, is unusual in being both irenic and realistic, with an emphasis on the importance of culture and of historical witness. It puts human persons, not ideologies, at the centre of things. Still little known in Britain or the United States, it deserves attention from those concerned with religious pluralism. [S.C.]