See two related blogs, one  on EDUCATION, based on Beauty for Truth’s Sake, and the other on the ECONOMY, also containing reflections on politics, ecology and society. 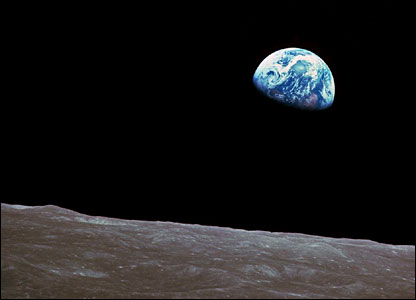 This photo of a crucifix floating weightlessly in space inside the International Space Station, was taken by cosmonaut Maksim Suraev. He describes the several icons they have on board, and a “relic of the true Cross”, along with the Gospels. What a contrast to Soviet times! What a contrast, too, with first-century Palestine, when none of the stars in the sky were man-made. Since that time, men and demons have tried to eliminate Christianity and failed. Two thousand years later we are taking it with us into space.

The crew of Apollo 8 took turns to read from the Book of Genesis as they watched the Earth rise over the lunar horizon. Less than a year later, on 20 July 1969, Presbyterian Buzz Aldrin received communion on the surface of the moon itself. Later he wrote: “In the one-sixth gravity of the moon, the wine slowly curled and gracefully came up the side of the cup. Then I read the Scripture, ‘I am the vine, you are the branches. Whosoever abides in me will bring forth much fruit.’”

In Advent we await the birth of Christ. We know he has already come, but that he is also still to come in the future, when he will be revealed to all, and we live in the time between those two moments. It is like the time of Mary’s pregnancy, as she felt the new life growing within her, and prepared to give birth. We too must prepare ourselves to give birth, in our own way bringing Christ to our neighbour. When once we have received him in baptism, he will not leave us alone. When we “go up with haste” to the hill country (Luke 1:39), even to the hills of the moon and Mars, we will be carrying him secretly within ourselves.

Christmas has come, and in the period before Epiphany we might want to meditate on these words by the French Catholic writer Georges Bernanos (1888-1948), which are quoted in a reflection by Fr Thomas Rosica CSB on Zenit:

“From the beginning, My Church has been what it is today, and will be until the end of time, a scandal to the strong, a disappointment to the weak, the ordeal and the consolation of those interior souls who seek in it nothing but myself.  Yes […] whoever looks for Me there will find Me there; but he will have to look, and I am better hidden than people think, or than certain of My priests would have you believe. I am still more difficult to discover than I was in the little stable at Bethlehem for those who will not approach Me humbly, in the footsteps of the shepherds and the Magi.  It is true that palaces have been built in My honor, with galleries and peristyles without number, magnificently illuminated day and night, populated with guards and sentries. But if you want to find Me there, the clever thing is to do as they did on the old road in Judea, buried under the snow, and ask for the only thing you need– a star and a pure heart.”

I am very grateful to our webmaster, Mark Armitage, for the changes he has introduced to our site this month. We now have a Home page, and the main menu has been reorganised so as to make the site easier to navigate. Further improvements will be made in the coming year. — S.C.