From Saturday 17 May 2008, items from the G.K. Chesterton Library will be part of an unprecedented exhibition of the Art of GKC in Oxford. The exhibition will be open to the public for two weeks only. [It has since been extended for another week, until Saturday 7 June.]

We think of him as a man of letters, a journalist, philosopher-at-large, playwright, detective story writer, apologist, but Gilbert Chesterton as a young man studied painting and drawing at the Slade, part of the University of London. From an early age he showed a huge natural talent. Aidan Mackey, who created the Chesterton Library, has an example of his skill from the age of seven. Other items in the collection include pencil sketches, numerous drawings in the margins of his books, published book illustrations, and a multitude of figures and backdrops from a large toy theatre he made to entertain the local children in Beaconsfield.

Opening times can be found on the new Art Jericho web-site. Do come if you can, and invite others to drop by. 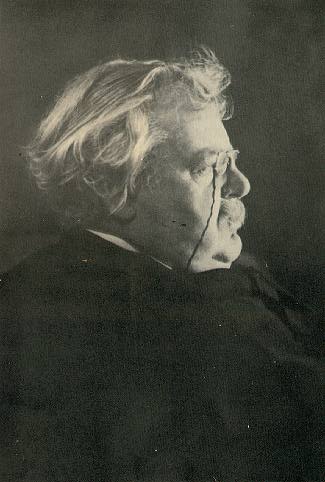 Named after Jericho, the district in Oxford where the building can be found, the new gallery will later host other exhibitions and seminars, slideshows and talks, some in association with the Centre for Faith & Culture, located upstairs in the same building (at 6a King Street).

Acquired last year by the Thomas More College of Liberal Arts in New Hampshire to develop its Oxford programme, for the last ten years the Centre has been the custodian of the Chesterton Library, some of that time with the generous support of the G.K. Chesterton Institute at Seton Hall University. Numerous researchers have come to do research in the archive (and no doubt also to try on his hat and sit on his chair, since the collection contains many unique personal items of Chesterton’s on permanent loan from the British Library). Apart from its Chesterton-related work, and the hosting of American students, the Centre edits and publishes the international journal Second Spring, and will soon be launching a book imprint for Thomas More College called “Second Spring Publications”.