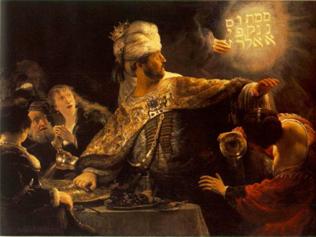 And the kings of the earth, who committed fornication and were wanton with her, will weep and wail over her when they see the smoke of her burning; they will stand far off, in fear of her torment, and say, “Alas! alas! thou great city, thou mighty city, Babylon! In one hour has thy judgment come.” – Apoc. 18:9-10.

It probably isn’t the end of the world just yet, but who am I to say?  It is in any case becoming hard to avoid the conclusion that Chesterton arrived at:  “The whole modern world has divided itself into Conservatives and Progressives. The business of Progressives is to go on making mistakes. The business of the Conservatives is to prevent the mistakes from being corrected.”  Perhaps it is time to correct some of the mistakes.  A Distributist perspective can be found here.

In the meantime, we pray.  And maybe we read the Book of Revelation, not to find out what will happen next, but to remind us of what history is all about.  In fact Revelation is less about predicting the future than about Liturgy, according to Dr Scott Hahn, who expresses a growing consensus among theologians that the last book in the Bible was intended to be read as a kind of commentary on the Mass.  For the Eucharist on earth is a participation in the Heavenly Liturgy that St John glimpsed in his visions on Patmos.  As Scott writes, “The new Jerusalem came to earth, then as now, in the place where Christians celebrated the supper of the Lamb.”  We will be exploring this vision of the Cosmic Liturgy in our Oxford conference on 1 November with Scott Hahn, Aidan Nichols, Adrian Walker and Michael Waldstein, Scripture and Liturgy in the Theology of Benedict XVI.

Pope Benedict is our inspiration. The following is an extract from an online article by Sandro Magister:

‘Benedict XVI … has identified his mission as successor of the Apostles precisely in being the celebrant of a “cosmic liturgy.” Because “when the world in all its parts has become a liturgy of God, when, in its reality, it has become adoration, then it will have reached its goal and will be safe and sound.”

‘It is a dizzying vision. But Pope Ratzinger has this unshakable certainty: when he celebrates the Mass, he knows that the entire action of God is contained in it, woven together with the ultimate destiny of man and of the world. For him, the Mass is not a mere rite officiated by the Church. It is the Church itself, with the triune God dwelling within it. It is the image and reality of the entirety of the Christian adventure. …

‘Easter, or the passion, death, and resurrection of Jesus, is an action that took place once in time, accomplished once and for all, but it is also an act carried out “forever,” as the Letter to the Hebrews highlights well. And this contemporaneousness is realized in the liturgical action, where “the historical Passover of Jesus enters into our present, and from there its goal is to touch and embrace the lives of those who celebrate it, and, therefore, all historical reality.” As cardinal, in the book “The Spirit of the Liturgy,” Ratzinger wrote evocative pages about “Church time,” a form of time in which “past, present, and future penetrate one another and touch eternity.”

‘… But the structure of the Mass also demonstrates this in a striking way, as Pope Benedict recalled in a commentary on the supper of the risen Jesus with the disciples in Emmaus, at the Angelus on Sunday, April 6, 2008. In the first part of the Mass, there is the listening to the Holy Scriptures, and in the second there are “the Eucharistic liturgy and communion with Christ present in the Sacrament of his Body and his Blood.” The two tables, of the Word and of the Bread, are inseparably connected.

‘The homily is the bridge between the two. The model is Jesus in the synagogue of Capernaum, in Chapter 4 of the Gospel of Luke. When he rolled up the scroll of the Scriptures, “the eyes of all in the synagogue looked intently at him. He said to them: ‘Today this scripture passage is fulfilled in your hearing’.” In his homilies, Pope Benedict does the same thing. He comments on the Scriptures, and says that “today” they have been fulfilled in the liturgical act that is being celebrated. With the repercussions that follow from this for the lives of all, because – as he has written – “the celebration is not only a ritual, it is not only a liturgical game, but is intended to be ‘logiké latreia’, a transformation of my existence in the direction of the Logos, an interior contemporaneousness between me and Christ.”‘