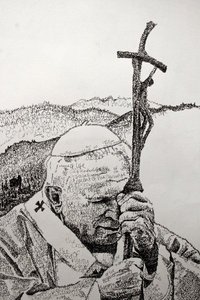 The big project at the end of this month is of course Leonie’s new play about Pope John Paul II, THE QUALITY OF MERCY, commissioned to coincide with the run-up to the Beatification on Divine Mercy Sunday. The play is described here, and will be performed at the Oxford University Catholic Chaplaincy on 27, 28, and 29 April. Please don’t miss it! It is all about discovering the meaning of life, and discerning a vocation. The music is by the young composer Ben Nichols, and the scriptural translations are by Dr Carl Schmidt of Balliol College.

EWTN recently filmed a documentary about the making of the play, but I don’t yet know when that will be broadcast. More news when I have it.

Recently, in order to facilitate “a dialogue with those to whom religion is something foreign”, the Pope created a “Courtyard of the Gentiles” and initiated a series of discussions around the world with thinkers who do not share the Christian faith.

No doubt the preparedness of such people to enter the dialogue will depend partly on the degree of respect they already have for the Church. Someone who despises Christianity is unlikely to be interested in debating its claims – unless to obtain a platform for contrary views. Nor will a Christian believer be able to engage others in dialogue if his interest is primarily in conversion. Before that he must be interested in truth – in the reality of things. It is a genuine openness to truth, a search for authenticity and coherence, that alone makes true dialogue possible and desirable. Certainly the Christian will think he has something vital to contribute, but so will the other, and both are correct. Each adheres to a position because of something valuable that he has perceived or apprehended, and this value must be present in the more complete picture of reality that both are seeking.

As the Second Vatican Council noted, “in the face of modern developments there is a growing body of men who are asking the most fundamental of all questions or are glimpsing them with a keener insight: What is man? What is the meaning of suffering, evil, death, which have not been eliminated by all this progress? What is the purpose of these achievements, purchased at so high a price?” (Gaudium et Spes, 10). When such questions begin to be asked, the dialogue is possible. But only if both sides focus on the question, and open themselves to reality. If the truth does not speak to our heart, it does not speak to us at all.