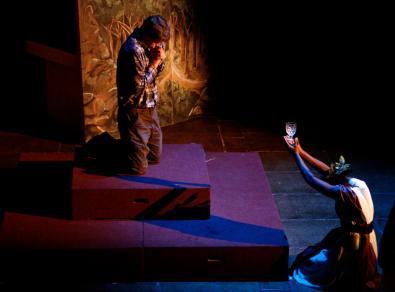 The beatification of John Paul II on Divine Mercy Sunday (1 May) was the occasion and inspiration for Leonie Caldecott’s new play, “The Quality of Mercy”, performed over three nights preceding the beatification, at the Oxford University Catholic Chaplaincy. As the author’s husband, I may be accused of bias, but it seemed to me, watching the final performance, that something extraordinary had been achieved, bringing to fulfilment so much of what the Centre for Faith & Culture and Second Spring had been talking about over the past twenty years. The late Pope had been a playwright and keen patron of drama, and worked with the “Rhapsodic Theatre” in Poland. The new play, directed by Teresa Caldecott with choreography by Anna Maria Mendell and music by Benedict Nichols featuring the voice of John Paul II, was part Theatre of the Word and part Ballet of the Word, a multi-levelled Theo-drama about youth and age, despair and modernity, vocations to marriage and celibacy. It wove together the poetry of John Paul II with Shakespeare’s Merchant of Venice and passages from Scripture (in beautiful adaptations by Dr Carl Schmidt of Balliol). It exposed the spiritual warfare taking place in the everyday life of young people. It contained the late Pope’s teaching on Mercy, and on his Theology of the Body – all held together by a strong story about a group of youngsters on a hike to the shrine of Manoppello in the Abruzzi, during the last days of John Paul’s life, accompanied by a mysterious stranger who leads each of them to a deeper understanding of themselves and of God’s love. This was a work that took seriously what John Paul had said in his “Letter to Artists” (1999): “unless faith becomes culture, it has not been really welcomed, fully lived, humanly rethought.” There are various interviews and articles about the play on our Forum page, including links to EWTN coverage and a longer version of this review. The play was the second from Divine Comedy Productions, set up with the Oxford Oratory last year. We hope to publish the plays soon, and are urgently seeking funding to cover the remaining costs of the production and to support future developments.

REGULAR BLOGS: All Things Made New, also Beauty for Truth’s Sake, and The Economy Project.