No spring nor summer beauty hath such grace as I have seen in one autumnal face. 2 September, 2013

You can also visit Stratford Caldecott’s blogs: Beauty in Education and All Things Made New. 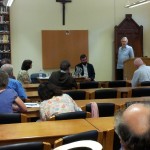 INTER-FAITH COLLOQUIUM  In the afternoon of 20th July we held a free event in The Aula at Blackfriars’ Hall, Oxford, titled ‘From Darkness to Light: God’s Call to the Creature in Christianity and Islam’. Speakers Carol and Philip Zaleski, Stratford Caldecott, and Karim Lahham explored Christian and Islamic understanding of creaturehood, and its implications for the way we think about personal identity, human potential, happiness, eternal life, and work. Plans for the next interfaith colloquium in November will be announced here shortly.

RIO, YOUTH, & THE ENVIRONMENT Sophie Caldecott has returned from World Youth Day in Brazil, where she gave a paper at the Creatio conference written by her and Stratford on ‘Humanising Environmentalism’. You can find the paper in three parts on our blog, starting HERE. 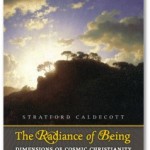 PUBLISHING  Stratford Caldecott’s latest book, The Radiance of Being: Dimensions of Cosmic Christianity, was launched recently by Angelico Press! You can purchase via Amazon. Also recently, with the first part of the new Hobbit movie released in cinemas and on DVD and the second part coming later this year, the publishers Crossroad have published a new, expanded edition of Stratford Caldecott’s book on the great Catholic writer J.R.R. Tolkien and the spiritual meaning of Middle-earth. Called The Power of the Ring, the new edition incorporates and supersedes the earlier Secret Fire published by DLT, which is now out of print. A brand new Spanish edition of the same book, El poder del Anillo, is also available.  Meanwhile BEAUTY IN THE WORD: Rethinking the Foundations of Education, Stratford’s sequel to Beauty for Truth’s Sake, completing his study of the seven Liberal Arts, was published in 2012. Education is in crisis, and new possibilities are opening up all the time, but any genuine reform will have to be based on an understanding of what education is for. Follow the link to find out more (and read an article on the whole project here). It is published by Angelico Press and available through Amazon. Read the interview.

SUMMER SCHOOL Our 2013 Oxford Summer School, ‘The Tempest of the Times: the Dilemma of Catholic England from the Reformation to the Modern Age’ has come and gone. Lectures were from Clare Asquith, Dr Michael Ward, Alice Hogge, our Directors, and others, on topics that include Shakespeare, J.H. Newman, C.S. Lewis, and J.R.R. Tolkien, and visits to London, Dorchester on Thames, and a recusant-era house complete with priest holes. The programme is organized in conjunction with Thomas More College of Liberal Arts, NH, who runs an introductory week directly before the Oxford course on their campus for the student undergraduate participants.

COLOURING BOOKS  Stocks are low of our much-loved The Mass Illustrated for Children, designed not just to keep a child quiet during Mass, but as a rich resource for parents and catechists to use to explain what happens in the liturgy to young children – to stimulate both faith and imagination. Also, Scott Hahn’s introduction to the Bible for children (God’s Covenant with You), a colouring book illustrated by David Clayton in the style of classical icons and illuminations, is still available, along with our other titles, all at bargain prices. Books in the Second Spring Catechesis series are available through Thomas More College in the US or directly from our distributor in the UK. More books are in preparation. See the books in action in this featurette or Second Spring Catechesis film. For details of how to order, look under the BOOKS section in the left hand menu. 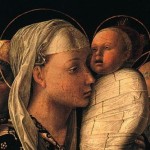 SECOND SPRING JOURNAL  2012 marked two decades since the first appearance of our flagship journal Second Spring as a supplement in Catholic World Report. The Seventeeth issue, on ‘The Economy’ is on its way! The sixteenth issue was on the theme of Holy Vessels and includes articles by Duncan Stroik, Margaret Atkins, Jerome Bertram CO, Margaret Truran OSB, Léonie Caldecott, and others. You can purchase back issues from Thomas More College in the U.S., or contact us at the Oxford office. 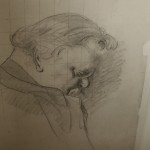 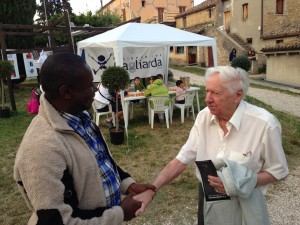 THE SIERRA LEONE CHESTERTON CENTRE  was started by a former student of Plater College and Oxford University, John Kanu, and is a centre for community-led sustainable development inspired by the Distributist ideals of G.K. Chesterton in one of the world’s poorest countries. It is helping to revitalize the rural economy on which the country depends. It desperately needs equipment and tools, ranging from scissors to computers and generators. Detailed information is available on request. Help if you can!
Here is a lovely picture of Aidan Mackey and John Kanu at the gathering of the Società Chestertoniana Italiana in July: 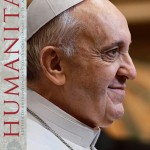 HUMANITAS  This important international journal of Christian anthropology and culture, from the Pontifical Catholic University of Chile, is also available in a beautifully produced English language edition. The first English-language issue is about the legacy of Pope John Paul II, the second has a number of important articles on Pope Benedict’s call for a broadening of human reason, the third  is on the theme of the Year of Faith. The fourth is a tribute to Benedict XVI and Pope Francis, and contains a profound analysis of our cultural crisis from Archbishop Bergoglio, as well as lavishly illustrated articles on modernity, Hildegard of Bingen, Jean-Jacques Rousseau, and J.R.R. Tolkien. The issue can be read online with free registration.
Also now available for free download from the Humanum site is a Vademecum or Handbook of John Paul II’s anthropology, plus a selection of other useful and important documents from John Paul II and Benedict XVI.