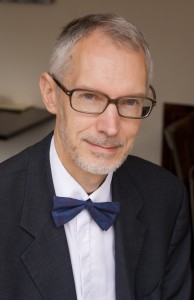 Stratford Caldecott, husband of Léonie and father to Teresa, Sophie, and Rose-Marie, passed away on Thursday afternoon. The Requiem Mass will be at 10am on 31st July at the Oxford Oratory church of St Aloysius, and he will be laid to rest in Wolvercote Cemetery, Oxford.

Donations of un-madeup flowers (white, blue or lilac) for the decoration of the church and reception will gratefully received on the morning of Wednesday 30th July, delivered to the church. Alternatively, if you would like to give a donation to charity in Stratford’s memory, the family would like to suggest that these be made to Sobell House Hospice or Prostate Cancer UK.

Stratford Stanley Francis Caldecott, MA (Oxon.), STD, FRSA, was born in London to Moyra and Oliver Caldecott, who had moved from South Africa shortly before. He grew up alongside his younger brother Julian and sister Rachel surrounded by artists and writers.

Educated at Dulwich College, he came up to Oxford in 1973 to read Philosophy and Psychology at Hertford College, where he met the woman who was to become his wife and collaborator Léonie Richards. They married in July 1977, and lived in Oxford and London, before moving to Boston, Massachusetts where in 1985 they had their first child, Teresa. They moved back to England in 1987, and eventually back to Oxford.

A life-long pursuer of Truth, Beauty, and Goodness,  Stratford became a Roman Catholic in 1980, and his wife in 1983. His conversion is documented in The Path to Rome (Gracewing, 2010) and The Beauty of God’s House: Essays in Honor of Stratford Caldecott, ed. Francesca Murphy (Wipf & Stock, 2014).

For many years he worked as a Senior Editor at Routledge, HarperCollins, and T&T Clark, but in the early 1990s he and his wife, Léonie, founded the Centre for Faith & Culture in Oxford (first based at Westminster College, then Plater College, and later from an office in Jericho, north Oxford). He and Léonie organised several influential conferences, research projects, and summer schools. In 2001 they founded the journal Second Spring, which remains the flagship publication of the Centre.

Stratford served on the editorial boards of Communio, The Chesterton Review, and Oasis, and wrote and edited books on J.R.R. Tolkien, the seven Sacraments, the historian Christopher Dawson, the Book of Revelation, education, and liturgical reform in the Catholic Church. He spoke frequently at conferences, taught at a number of colleges and universities, and published widely on Christian apologetics, theology, and cultural themes in magazines and newspapers on both sides of the Atlantic, including Touchstone, This Rock, Parabola, the Chesterton Review, The Imaginative Conservative, the Catholic Herald, The Tablet, and the National Catholic Register.

Collaborating for many years with various Chestertonian organisations, most especially the G. K. Chesterton Institute at Seton Hall University, Stratford was the guardian of the G. K. Chesterton Library of Aidan Mackey (now housed at the Oxford Oratory), and was appointed the G.K. Chesterton Research Fellow at St Benet’s Hall, Oxford. He encouraged John Kanu, a student of his at Plater College, to found a G. K. Chesterton Centre in his home country of Sierra Leone, which does vital work in community-led sustainable development. Stratford also began to draw together worldwide networks of people involved in the development of Catholic ecology, alternative economics, and education.

In 2010, he and Léonie formed a limited company called Second Spring Oxford to run the Centre for Faith & Culture with their daughter Teresa as manager. They began to edit the UK and Ireland edition of the monthly prayer booklet MAGNIFICAT, as well as publishing catechetical colouring books for children, and organising a summer school on the culture of Catholic England with the Thomas More College Liberal Arts in New Hampshire. Strat also edited Humanum, the online journal of the Centre for Cultural and Pastoral Research in Washington, DC, and worked as a commissioning editor for CTS. In collaboration with the Tabah Foundation, he began a series of interfaith colloquia for Christian and Islamic thinkers to discuss notions of society, the secular, and vocation.

Stratford was diagnosed with prostate cancer in October 2011. After this he wrote profusely, publishing three books: The Power of the Ring (Crossroad, 2012, rewritten from an earlier edition published by Darton Longman and Todd), The Radiance of Being (Angelico Press, 2013), and Not As the World Gives (Angelico Pr, 2014). His earlier books were The Seven Sacraments (Crossroad, 2005), All Things Made New (Angelico Pr/Sophia Perennis, 2011), Beauty for Truth’s Sake (Brazos, 2009), and Beauty in the Word (Angelico Pr, 2012).

Stratford received an honorary doctorate in Sacred Theology from the Pontifical John Paul II Institute at the Catholic University of America in 2013, and is to be awarded posthumously the 15th Paideia Prize “for lifetime contribution to classical education and the cultivation of wisdom and virtue” by the CiRCE Institute next year.

Personal tributes by the family can be found in this article by Sophie, the art of Rose-Marie, and the poem by Léonie in Stratford’s Festschrift. His daughter Teresa will endeavor to continue the work of the Centre alongside her mother.

Do visit Stratford Caldecott’s related blogs: Beauty in Education and All Things Made New.
You’ll also find a lot of free articles and resources here in the bottom section of the navigation menu.